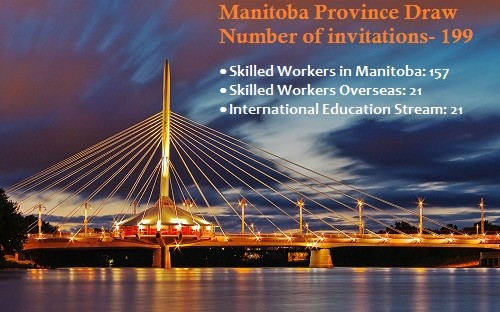 Province of Manitoba held its 95th PNP draw inviting a total of 199 immigrants issuing them Letters of Advice to Apply (LAAs) on July 31.

Out of these total 199 LAAs issued, 15 were issued to the candidates in the federal government’s Express entry program. Express Entry candidates with provincial nominations are awarded 600 CRS points, effectively guaranteeing an ITA for Canada PR Visa to the IRCC.

Manitoba PNP uses an Expression of Interest (EOI) system to organize the profiles of the immigrants who have applied for provincial nomination. Under this system, profiles are awarded points out of a total of 1,000 points. These points are awarded based on factors like language skills in English or French, Education, Work experience, Manitoba connection, and among other factors.